MY ZEAL FOR EDUCATION GAVE BIRTH TO AL-HIKMAH UNIVERSITY

The proprietor of Al-Hikmah University, Alhaji (Chief) (Dr) Abdur-raheem Oladimeji (OFR),  Jagunmolu of Igbomina land and Arogundade of Lagos, a reknowned  philanthropist, expressed the reasons for the establishment of Al-hikmah University in this exclusive interview. 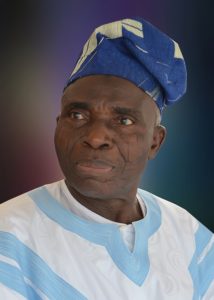 Sir could you please, give us a brief background about yourself?

I was born on 8th June, 1938 to Mallam Yusuf Ayinde Oladimeji (Arowomole) and Hawau Ajike Yusuf Oladimeji (Omo Elerinmosa). May their souls rest in peace. I am the last child of my parents, with nine siblings ahead of me. I am a husband, father and grandfather.

As a reknown business tycoon, what motivated you to establish a university?

We give thanks to Almighty Allah. May He grant us long life and ease our affairs. We pray Al-Hikmah University continues to grow rapidly beyond our expectation. My intentions of setting up Al-Hikmah University are numerous. I have been a trader since 1948 back then in Lagos,and all I did was basically trading. We thank Allah that trading became a successful venture. Meanwhile, among my goals in life is pondering on how to be successful in all my endeavours, as well as accommodating my fellow human beings to light their candles from my flame of success. I pondered on how to scale the hurdles of life. The zeal and passion for formal education kept burning in me. The first school in my home town lay on a token land given to the school management by my father. The school offered tuition for both Western and Arabic studies. My hope to get enrolled in this school was dashed on one fateful day while accompanying my father to his farm. We witnessed a scenario of disciplinary action taken on one of the pupils, which my father frowned fervently at. He told me that he could not bear anyone doing that to any of his children. Hence, the dream of enrolling in that school was abortive.

While in Lagos, writing a letter to my beloved ones back home was extremely difficult, and this motivated my pursuit for formal education by enrolling for a part-time tutorial class. I started with the Yoruba alphabet and after a successful completion, I proceeded to the English alphabet. I paid 2 kobo as tuition fee, which my boss at that time could not afford and this factor crashed my educational dream again. The zeal and passion reawakened when I needed to scribble business ideas popping up, yet I lacked writing skills at that time. I could not seek assistance because it was absurd to ask people to help write my own ideas. I started a mini enterprise of selling empty cartons, where I earned 2 kobo after my total sales. This paved the way towards achieving my goal, though I did not successfully complete the English alphabet because the income from the carton sales was not constant.

I kept striving till Allah blessed my efforts with abundant wealth and I eventually completed my English alphabet. In my quest for beneficial knowledge, I fasted and prayed to Allah, requesting him to bestow on me beneficial knowledge, and that request was granted. Every time I contributed in a discussion, my opinion was given credence. Miraculously, I started reading Yoruba text fluently and interpreted it perfectly. I embarked on English text too and during this herculean task, I got merchandise with Nigerian army, where I supplied food materials, before extending business potentials towards ammunition supply, and that was what Allah used to bless me financially.

Before that financial breakthrough, I made an oath to Allah that I would construct mosques and factories and, by His grace, I embarked on Hajj with my son. During that pilgrimage period, my son asked me about my plans of setting up a factory. The plans were readily available and about to kick-start. My business partners from France were already in the country. My son suggested that I should rather establish an academic institution where Arabic studies would be among the courses being offered and forget about the factory. He is currently an Engineer with the highest qualifications in his field. I asked astonishingly if he was sure about his suggestion and he gave an affirmative response. Then we prayed towards it.

Immediately I returned from Hajj, I met my foreign associates and told them I had changed the plan of setting up a factory. My current intent was to establish a school where Arabic and Western studies would be taught. I called my banker who did the account of the deal so far and paid them off. The site allocated for the factory construction is now occupied by the mosque in Al-Hikmah University. The mosque was the first structure of Al-Hikmah University. The move created a fog because no one knew the real plan of establishing a university. The architectural designs of the University came from Madinah. Today, any country I visit, I understand the language after staying there for a short period. We did not start with Al-Hikmah University. It metamorphosed from AbdulRaheem College of Science Foundation to what it is today. The architectural designs of the classrooms were imported from Medinah. That is why you can’t see similar structures in Nigeria.

My reason for abolishing the factory plan aggravated from the rapid rate at which the name and wealth of the so-called well- to- do go into extinction. Most former Heads of State who knew about my plans to invest in education encouraged me and advised me to pray to Allah to ease my affairs. It became my prayer point. There is no trace of formal education in my family and my prayer point to Allah was to make me witness the rise of doctors, lawyers, judges, agricultural technologists and academia in my procreation and recreational families, which He has granted. I am an elated man today because my family is now a stronghold of education, and Al-Hikmah University is a blessing from Allah. That is the main reason I invested in education and I prayed to Allah to take it to the highest peak. The common practice is that after B.sc or B.A, you apply for Masters and Ph.D.programme. Al-Hikmah University has will, insha-Allah, commence her masters programme and Ph.D will soon follow.

Despite not having any formal education, how easy is it for you to manage Professors, Doctors and other academia as your staff?

Well, only Allah can decide that. The previous and current  staff I work with have benefitted positively from me and basically, what I do is to render elderly advice. You know, one cannot learn everything in school. My advice is geared towards the progress of the university and I am happy with the compliance. They are all wonderful people. I have a good relationship with everybody. That is a blessing from Allah. Human beings are very hard to manage, but I give the credit of the good rapport between my staff and me to Allah.

The new College of Law is another blessing from Allah. Apart from being a dream of the    Management, it also came as a result of the demand for its establishment. I am grateful for Allah’s favours. The challenges encountered at the construction stage of the College of Law were not too demanding, but sufficient to prevent my progressive action. After completion, the final structure was more beautiful than the original architectural design. To compare and contrast with my house in Abuja, which faced almost the same challenge, the best similitude to portray it is building a six-storey structure on a drainage passage which became a one-in-town structure. Some trivial, but amazing facts about that structure, which intrigued the interest of foreign construction companies to the extent of taking snapshots, and which of course earned me a Certificate of Recognition, was despite how tall the building is, there was no crane in sight during its construction and this is the most amazing part to the foreign contractors. I simply used a scaffolding technique rather than using a crane. Back to the College of Law, the accreditation team from NUC also attested that the structure is a grandeur. Allah has also made all these easy for me to accomplish. Another instance is a construction I supervised for my Spanish friend in Madrid, Spain. It took four months to complete, and I was surprised to see the President of Spain commissioning a project I constructed. I show gratitude to Allah for his blessings before, now and later. The hostel facility on the College of Law campus encountered an amendment totally different from the specifications on the initial architectural design, in order to achieve a more conducive and spacious structure for the benefit of the students. The materials previously stated are considered obsolete and inferior. We will substitute them for the quality and latest materials, though much more expensive. In-sha  Allah, before the College of Law commences with academic activities in, the hostel facilities will have been completed and ready for use.

Thank you Sir, for spending your time with us.