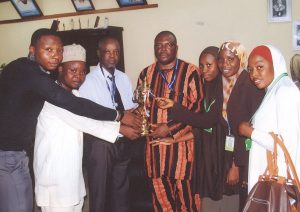 This was revealed by the Chairman, 2014 Press Week, and Mr. Ali Muhammed Rabiu on 15 may, 2014 at the Dinner / Merit Awards Organized by the Union to mark the Annual Press Week of the Union at Savana Centre, Ilorin, kwara State.

He stated further that Al-Hikmah University emerged second runner-up in the debate competition among the three schools that supported the motion.

He, therefore, congratulated all the participants and implored all students to imbibe the habit of reading and writing

The picture above shows the wining team of Al-Hikmah University in the Vice-Chancellor’s office, with the Head of Department of Mass Communication and some lecturers in the Department.