VIRTUES OF MATRIMONY EXTOLLED, AS JAGUNMOLU GAVE OUT MUBARAKAH IN MARRIAGE

He made this remark at the Nikkah Ceremony and Reception in honour of Mubarakah Taiye Oladimeji, the daughter of the Registrar of the University, Alhaja (Chief) Rasheedat Oladimeji.

The ceremony, which witnessed the betrothal of Mubarakah to Tohir Ajiboye, took place within the University Campus in Adewole, and was attended by the cream of the society, including His Excellency, the Executive Governor of Kwara State, (Dr.) AbdulFatah Ahmed, represented by his Commissioner for Works and Transport, the former Inspector-General of Police, Alhaji Musliu A.K. Smith, Mr Olarewaju Onadeko, Director-General of the Nigerian Law School, Senator (Dr.)  Rafiu Ibrahim and a former Nigerian Ambassador, Her Excellency, Alhaja Nimat Akanbi. 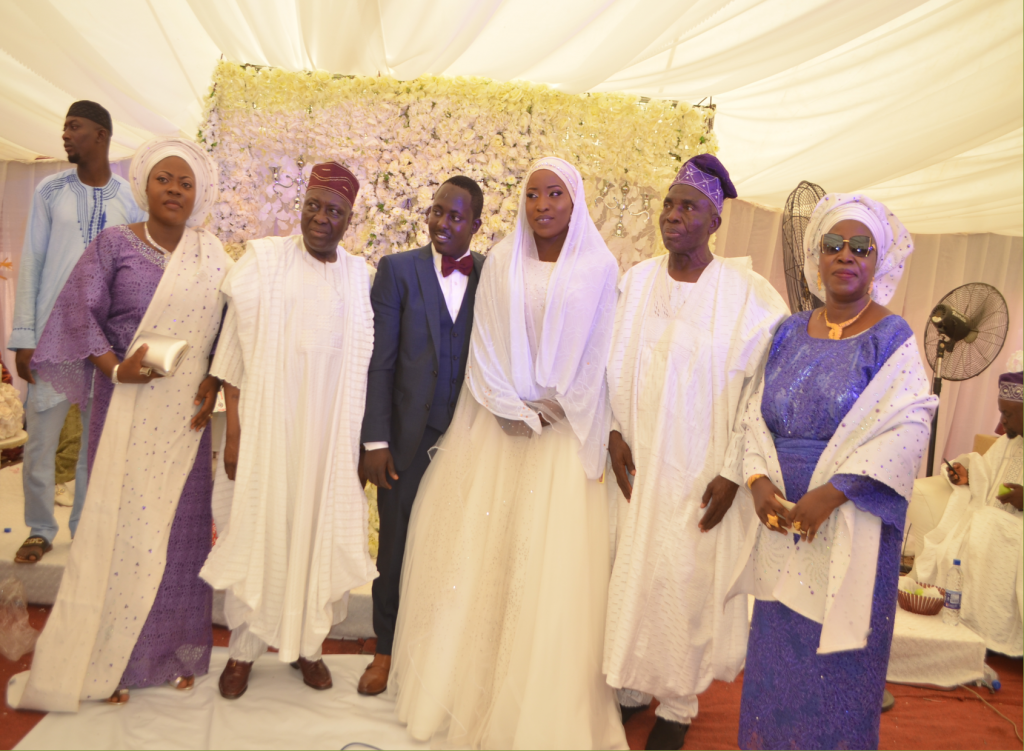 Speaking further on the virtues of marriage, Alhaji Coomassie, whose message was delivered by the Acting Director of Academic Planning, Al-Hikmah University, Dr AbdulLateef Oladimeji, advised the couple to do everything with love. He urged them to pray, eat, walk and think together as a couple in order to build a solid home, and prayed for them and their parents for the success of the marriage.

Others present at the ceremony were Royal Fathers from far and wide, including representatives of Eleko of Eko, former and serving Vice Chancellors, including the Vice Chancellor of Al-Hikmah University, Professor Taofeek Ibrahim, Registrar of JAMB, Professor Ishaq Oloyede, Registrars from other Universities and Muslim Scholars.

The Nikkah was jointly conducted by Ulama’s from Al-Hikmah University and Igbaja.

Speaking at the occasion, the Founder, Al-Hikmah University, Alhaji (Chief) (Dr.) AbdulRaheem Oladimeji (OFR), Jagunmolu of Igbominaland and Arogundade of Lagos, who is the bride’s father, expressed his appreciation to organizations, scholars and individuals who made the event a success and prayed for their safe return to their destinations. He advised the couple to live their marital life with complete devotion and dedication, just as he urged them to always put God first in all their affairs and rely on Him in everything they do.