GRADUATES WHO HAVE SERVED IN THE ARMED FORCES ARE EXEMPTED FROM NATIONAL SERVICE- MRS. KUMOLU

The Chief Executive Officer, NYSC, Abuja, Mrs. E.O Kumolu, has disclosed that graduates who have served in the armed forces or the Nigeria Police for a period of more than nine months would not be allowed to participate in the National Youth Service Corps (NYSC).

She made this known while delivering her paper at the pre-mobilization briefing organized by Students Affairs Unit of Al-Hikmah University, Ilorin, which was held in the University Auditorium on Monday, February 2, 2015. 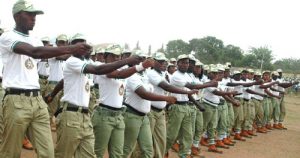 Mrs. Kumolu also added that graduates who had been conferred with National Honours like MON, CFR and CON are also exempted and such persons must present a letter of confirmation of the Award from the Secretary to the Government of the Federation (SGF).

The Chief Executive Officer however, noted that members of paramilitary organizations like Prisons, Customs, Immigration, FRSC, Civil Defence etc, are expected to participate in the Youth Service.

She advised nursing mothers and pregnant women not to report to the Orientation Camp because the environment is not conducive for them.